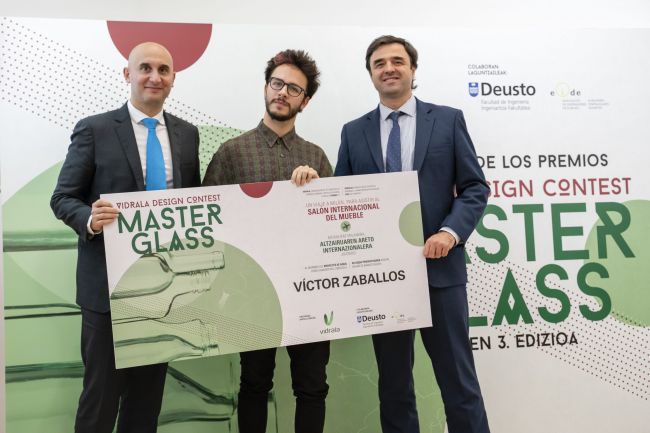 Representatives from Vidrala and the Faculty of Engineering at the University of Deusto yesterday presented the award to the designer Víctor Zaballos from IED for the 02 Aqua project, at an event held at the Edificio Ensanche in Bilbao.

O2 Aqua is a project that features a well-designed, well-documented theme that has been painstakingly presented.

This contest for new ideas for a range of segments is geared towards young students in Industrial Design, Engineering and Graphic Arts.

The prizewinning ceremony at the 3rd Vidrala MasterGlass Design Contest took place at the Edificio Ensanche. On this occasion the winning project from among more than 60 that took part was O2 Aqua, designed by Víctor Zaballos, a student from IED Madrid.

The prize – a trip to Milan with his tutor to attend the 2019 Milan Furniture Fair – was handed over by the Sales and Marketing Manager at Vidrala, Ángel Roldán, and the Dean from the Faculty of Engineering at the University of Deusto, Asier Perallos.

The jury, which featured Vidrala, the University of Deusto, the Basque Designers’ Association and the National Design Awards, Vincent Martínez and Quim Larrea, made a unanimous decision to award the prize to the project.

The members of the jury drew attention to the coherence of the graphic narrative of the proposal and the poetic role played by the illustrations, which meant the packaging was in tune with the content for which it is destined.

The jury drew attention to a further projects via an Accessit:

DIP by Irene Peñalver, Rubén Hernández and María Hernández from Murcia School of Design, for a very direct, thought-provoking and evidently functional project.

ESNE by Estibaliz Bilbao, from the engineering degree course in Industrial Design at the University of  Deusto, for an evocative, purposeful and innovative proposal.

DRESS by Consuelo Sánchez and Natalia Izquierdo from the Murcia School of Design,  for providing a comprehensive solution to packaging and its labelling.

The prizewinning ceremony which was held yesterday formed part of Bilbao Bizkaia DWeek, an event that promotes creative industries organised by the Bilbao Bizkaia Design Council (BiDC), which took place in Bilbao between 15th and 22nd November.

Two papers were presented before the prizes were handed over, and these were organised by Marcelo Leslabay, lecturer in Design at the University of Deusto. The first of these, titled “La reconstrucción Abad” was presented by Jon Abad, architect and designer, and President of EIDE. For his part, the architect, designer and journalist Quim Larrea presented a paper titled  “Buen/Mal diseño”.

Following presentation of the papers, the prizes were then handed over and the fourth edition of this contest presented, which has also updated its brand image.

The deadline for submission of new projects is 14th June 2019.

The projects submitted will also need to include a graphic proposal for the label and original ideas will be assessed regarding seals, lids and alternative, functional capsules in selecting the winner. The jury’s decision will be announced during the second fortnight of June 2019.

We use our own session and third party cookies to analyse our services and show you advertising related to your references, based on a profile drawn up from your browsing habits (e.g. pages visited).

You can accept or reject the use of cookies or obtain more information.

SettingsAccept all and continue browsing
Back

When you visit a website, it may store or retrieve information in your browser, mainly in the form of cookies. This information may be about you, your preferences or your device and is used, primarily, to make the site work as expected.

The information does not generally identify you directly, but may provide you with a more personalised web experience. As we respect your privacy, you can opt to exclude some types of cookies. You can click on the different category headings to learn more and change our default settings. However, if you block some types of cookies, your experience on the site may be affected and so may the services we can offer you.

These cookies are necessary for the website to work and cannot be disabled in our systems. Generally, they are only set in response to your actions in requesting services, such as, setting your privacy preferences, logging in or completing forms. You can set your browser to block or alert you to these cookies, but some areas of the site will not work. These cookies do not store any identification information.

These cookies allow us to track and analyse user behaviour on the site, and in particular to count the number of visits and sources of traffic so that we can better assess the performance of our site and improve it.

These cookies allow the web site to provide better functionality and personalisation, allowing the user to access the service with some general characteristics predefined according to a series of criteria in their terminal, such as the language, the type of browser through which they access the service, the regional configuration from which they access the service, etc. This category of cookies may be set by our company or by external suppliers whose services we have added to our pages. If you do not permit the use of these cookies, it is possible that some of these services will not function properly.

When you click on “Save Settings” your selection of cookies will be saved. If you have not selected any options, pressing this button will be equivalent to rejecting all cookies.

Save settingsAccept all and continue browsing