Since it was installed in Llodio, (Alava – Spain) in 1965, Vidrala Group has kept on growing, incorporating the most recent technological developments to its manufacturing processes and finished product control, becoming an obligatory reference in our sector.

Creation of Vidrierías de Álava S.A. Its manufacturing activity began in 1.966 with one furnace, two machines and a yearly output of 25,000 tons with only a dozen models.

The beginning of press and blow production of light bottles enabled Vidrala to become the technological leader of the national market, reducing the average weight of its containers.

Production reached 130,000 tons per year, and the company began to transform its furnaces, obtaining an energy saving of 50%, although productive capacity is maintained. The corporate name was changed to Vidrala S.A.

Vidrala shares were successfully launched on the stock markets of Madrid and Bilbao.

Crisnova, a 100% subsidiary of Vidrala, started its activity in Caudete (Albacete) with one furnace and a production capacity of 95,000 tons per year. Vidrala Group thus achieved an annual capacity of 225,000 tons with three melting furnaces. 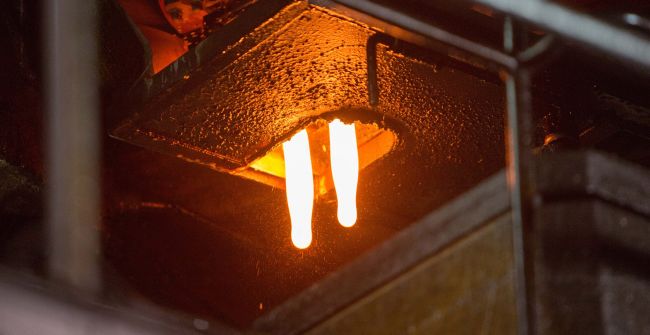 The third Aiala’s furnace was built up, increasing annual production capacity by 110,000 tons, totalling 340,000 tons per year for the Group.

The second Crisnova´s furnace came into operation, and the VIDRALA Group reached a production of some 450,000 tons per year.

Approval of the Strategic Plan of corporate growth.

Acquisition at the beginning of the year of two plants of O-I, one from BSN Glasspack at Castellar del Vallés (Spain) and one from Avir at Corsico (Italy), as a result of the strategic plan and reaching a production capacity of 805.000 tons for the Iberian Peninsula and 950.000 tons for the whole Group.
Valvitrum S.A. and Corsico Vetro S.r.l. are put into operation.

Creation of Vidrala like head of the Group formed by the productive plants of Aliala Vidrio, Crisnova Vidrio, Castellar Vidrio, Gallo Vidrio and Corsico Vetro and launching of the new corporate image. 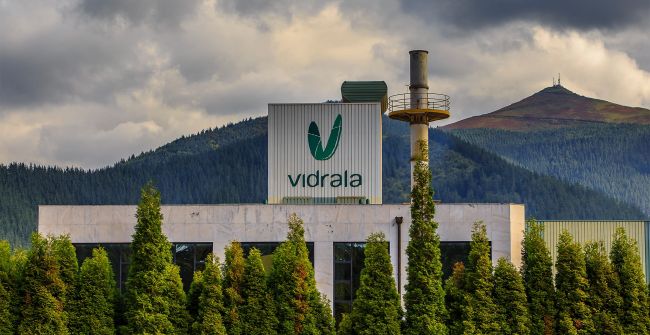 Acquisition of La Manufacture du Verre S.A. a glass plant founded in 2000 after the acquisition of Verlipack production facilities.

Launch of the natural range of sustainable lightweight bottles.

Vidrala becomes the 4th European player offering a complete service including not only the manufacture of glass containers, but also filling processes and logistics services.

Vidrala launches its own first contest of design for glass bottles, under the name MasterGlass Design Contest 2015. It is organised in cooperation with the University of Deusto Bilbao for Engineering. EIDE is also participating into this initiative.

Vidrala acquires Santos Barosa, manufacturer of glass containers that operates a large production center located in the town of Marinha Grande, Portugal, from where it produces more than 1,600 million containers per year. The integration of this business complements Vidrala's position in the Iberian market, leading to benefits for Vidrala's customers, employees and shareholders.

We use our own session and third party cookies to analyse our services and show you advertising related to your references, based on a profile drawn up from your browsing habits (e.g. pages visited).

You can accept or reject the use of cookies or obtain more information.

SettingsAccept all and continue browsing
Back

When you visit a website, it may store or retrieve information in your browser, mainly in the form of cookies. This information may be about you, your preferences or your device and is used, primarily, to make the site work as expected.

The information does not generally identify you directly, but may provide you with a more personalised web experience. As we respect your privacy, you can opt to exclude some types of cookies. You can click on the different category headings to learn more and change our default settings. However, if you block some types of cookies, your experience on the site may be affected and so may the services we can offer you.

These cookies are necessary for the website to work and cannot be disabled in our systems. Generally, they are only set in response to your actions in requesting services, such as, setting your privacy preferences, logging in or completing forms. You can set your browser to block or alert you to these cookies, but some areas of the site will not work. These cookies do not store any identification information.

These cookies allow us to track and analyse user behaviour on the site, and in particular to count the number of visits and sources of traffic so that we can better assess the performance of our site and improve it.

These cookies allow the web site to provide better functionality and personalisation, allowing the user to access the service with some general characteristics predefined according to a series of criteria in their terminal, such as the language, the type of browser through which they access the service, the regional configuration from which they access the service, etc. This category of cookies may be set by our company or by external suppliers whose services we have added to our pages. If you do not permit the use of these cookies, it is possible that some of these services will not function properly.

When you click on “Save Settings” your selection of cookies will be saved. If you have not selected any options, pressing this button will be equivalent to rejecting all cookies.

Save settingsAccept all and continue browsing